Sustainable Braintree, Inc. was nurtured and mentored by the Social Action/Environmental Committee (SAEC) of Braintree's  All Souls Church, Unitarian Universalist (UU). The church was designated a "Green Sanctuary" by the UU Ministry for Earth in 2006. Because of All Souls’ reputation as an environmentally-aware congregation, representatives of the church were invited to attend a quarterly meeting of Sustainable South Shore (SSSh) in Hull in August, 2007.The Co-Chairs of All Souls’ SAEC, Mary Mitchell and Diana Althouse, continued to attend these quarterly meetings, learning about initiatives in more than a dozen neighboring communities from Milton to Hull. They were later joined by Robert Fricke of First Baptist Church.

Inspired by the people and ideas they encountered at SSSh, All Souls' SAEC organized environmental events in Braintree, eventually attributing these events to a co-sponsorship of All Souls Church and Sustainable Braintree.
Initial events included:

The first Green Gala Fundraiser in February 2009 captured the imagination of the Braintree community, and raised awareness about Sustainable Braintree’s hopes and dreams. Plans were in the works for a Braintree Farmers Market, for conducting an analysis of Braintree’s carbon footprint, and for helping the Town promote its new Single Stream Recycling program. These projects came to fruition because of the creative energy and sheer hard work of committed volunteers, and because of the support of Town government. The Mayor’s Office, the Town Council, the Department of Public Works, and the School Department have all contributed to the success of Sustainable Braintree’s initiatives. 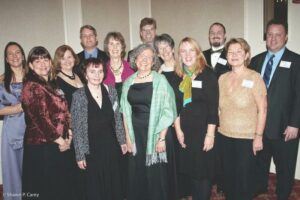 Our Steering Committee is comprised of up to twelve members elected as officers during each annual meeting. Our annual meeting usually occur in November and are announced via our newsletter.  The president, treasurer and clerk are elected annually by the committee at their first meeting following the annual meeting of the members.  Are you interested in joining our Committee?  Email info@sustainablebraintree.org.

Theme by Anders Noren — Up ↑